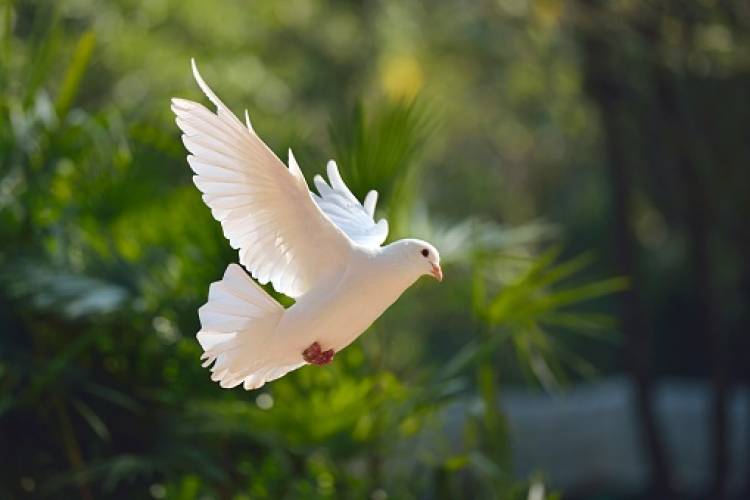 They were both alarmed! What does he want to do: cook us for dinner?

He stretched forth his hand inside the cage as both doves ran to the back to escape being picked. He managed to hold onto one and brought it out: it was the female dove. The male didn’t know what to think: am I the lucky one for not getting picked?

The male dove was upset! Noah freed her! And I am still stuck here in this dinghy, stuffy dark and smelly Ark! It’s NOT fair!!!

The female dove could not believe her luck!

“I never saw this coming”, she thought.

She flew up to the sky.

She flew to the right.

She flew to the left.

She flapped her wings as hard as she could, as she flew around filling her lungs with fresh air.

To think she had been in a cage in that Ark, limited by time and space!

Today, she has no limitations!

She could do whatever she wanted!

She thought of her partner still trapped in the cage in the Ark.

To think they were both stuck in that cage until 10 minutes ago!

She thanked her luck for getting picked.

She flew around for another 10 minutes, enjoying the cool breeze, the feel of the sun on her was heavenly! She had not seen the sun or felt the warm rays in several months and she was really happy to see and feel the sun again.

After about 30 minutes of flying around and enjoying her newfound freedom, she suddenly became tired!

“I need to perch somewhere and rest a while”, she thought…

She looked to the left: water everywhere!

She looked to the right: water everywhere!

She looked up: she sees the sun and the bright clouds!

She looked down: water everywhere!

But hey! She saw a dark spot on the horizon behind her!

“I can perch on that”, she thought…

She turned around and flew towards it.

And the closer she got to it, the larger the dark spot became.

Suddenly she recognized it: THE ARK!

The prison she just escaped from!

The cage of limitations and control!

But exhaustion was taking a toll on her.

She NEEDED to rest!

Would she swallow her pride and go back into the Ark?

Or would she just fall into the water and drown?

She weighed her options…

“If I go back there, they will laugh at me! I will become the butt of jokes! My story will go viral on Social Media! That will be very embarrassing! My reputation will take a knock…”

She flapped her wings with renewed vigour: the thought of going back to the Ark seemed to give her more strength!

In that moment, Noah opened the window and looked out. He saw the dove, flying close by!

He noticed she was flapping her wings hard, but she was losing altitude…

Their eyes suddenly met: the dove looked away, pretending she didn’t see him.

He knew she needed help.

He knew she would not ask for it (she’s FEMALE, remember?).

He knew she was concerned about her reputation.

He knew she was concerned about the optics.

He thought within himself: should I help her? Should I ignore her and let her pride destroy her?

He pondered on this for a few minutes…

He looked out again: the dove was close to the window, glancing at him desperately!

He stretched out his hand and grabbed her as she was just about giving up and falling into the water.

He brought her in and held her close until she recovered her strength.

He gave her some food to eat and water to drink.

Then he took her back to her cage…

Noah opened the cage with his right hand.

The other dove thought he had come for him too!

He will be joining his mate soon!

He will be FREE!

He started imagining himself with his mate, flying in the sky!

He imagined them soaring, tumbling and freewheeling in the endless expanse of space!

He was suddenly jolted back to reality as Noah’s left hand appeared, holding his mate!

To think she was away for less than an hour!

Noah dropped her in the cage and closed the door.

The male dove asked, “Babe! What happened? Why are you back so soon? I never thought I would see you again!”

She responded, “I really didn’t want to come back, you know! It was so much fun out there! It was exhilarating! I was free! I was unlimited!”

“Well, I flew too close to the Ark and Noah grabbed me mid-flight and forced me back!”

God Is In The Detail