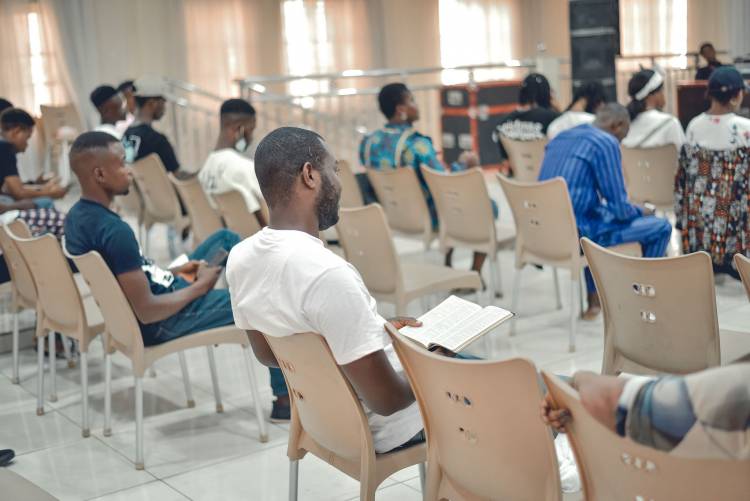 Someone called me today, the person saw
my last two threads and wanted to engage
me on them
Then the person said “Do you know there
is a special bond between pastors and lead
female ministers in the choir?”
I said “Hmmmm”
Then the person said “I know for a fact that
Pastor So and so and Sister such and such,
(a very popular music minister from Nigeria)
were having sex
"This was what led to the man’s divorce,
his wife said so"
I said “I have followed this pastor for many
years, his wife said nothing like that!”
Then she said “Well, you know women
usually keep silent in such cases
I said “This pastor’s wife is not one to
keep quiet and I think you know that”
Then she said “I saw it in a dream!”
Just like that!
She saw it in a dream and that was
supposed to be irrefutable proof that
would nail this man of God of adultery?
(Take it easy o, you busybodies, don’t
heap curses on your own heads)
I started laughing in such a manner
that she became embarrassed, then
she said “I have always trusted my
dreams and I am always right whenever
I see anything in my dream”
I said “So on the strength of your dream,
we should accuse this man of God and
this anointed lady of  Infidelity to both
their spouses?”
She said "It may not be tenable in court
but I am convinced it is true.”
So I said “But your own husband is
cheating on you, how come you didn’t
have a dream about that?”
I didn’t have any idea her husband was
cheating o, the words just flew out of
my mouth as I wanted to show her
the flaw in her dream theory
She said “How did you know? He has
left home for over a month, he is with
another woman”
I said “That was what God was showing
you when you had that dream but
instead of paying attention and adjusting
to the leading of the Holy Spirit, it is
someone else you are accusing…”
Then she said “May God forgive me, really?
It is true, I started suspecting he was
cheating on me around the time I had
that dream.
I even called Sister so and so and told
her about it but I didn’t know the two
are related…
PS: i am sharing this to help many of us
learn certain things.
Your dream is most likely about you and
your circumstances.
Before you begin to project your dreams
outwards and accusing people or making
trouble with it, check yourself.
Many who label people witches and so on
based on dreams also have to repent
As believers, we are led by the Holy Spirit

Happy Sunday everyone, I will like to show us
something quickly
I find it as an aberration.
I recently came across the phrase “Feet of clay”
The white people made it up and they bungled
it’s meaning based on scriptural terms
According to the rule of communications and
meaning
They got it awfully wrong.
They interpreted “Feet of clay” to mean a
fundamental flaw in a person, especially one
that is revered.
For example, a man of God who was expected
to live at a certain high standard and didn’t
due to human flaws or character flaws
When they did this, they displayed a lack
of practical wisdom and understanding of
the word of God
The term actually came from the vision of
Nebuchadnezzar in Daniel 2 and Daniel 7
Many believers or Christian teachers wrote
articles about in which can be found online
They are all wrong
I say this boldly!
"Feet of clay" according to the scriptures
refer to a time, season or dispensation
We must be wary of ascribing to the
word of God a meaning of our own making
rather than the meaning the scripture
gave it from the source
Nebuchadnezzer had a dream and in
this dream he saw
A statue with head of pure gold,
chest and arm of silver, belly and thigh
of bronze, legs of iron and the feet
made of partly iron and partly baked clay
According to Daniel in Daniel 2 from vs 36,
The rule of Nebuchadnezzar was the
head of gold, and other kingdoms that
would arise after him were the inferior
ones described as silver, bronze,
iron and clay
This has nothing to do with character
but it has everything to do with dispensation
The image represented how the world will
look and be governed at those times and
had nothing to do with the character of
the bronze and the feet of clay as the
weak link!
We are currently in the dispensation of
this feet of clay, what this means is that
the world is now governed by ideologies
and has rejected absolute truth!
In fact many refer to these days as
“Post Truth” or post Church” meaning
authority and leadership is no longer with
the ideal of truth or the church
Like clay, there is no strength of conviction,
everyone is doing what they believe is
right by themselves
During Nebuchadnezzar’s rule, the world
had one supreme leader and this was him!
He had control over half the expanse of
the planet earth and his rule was absolute
After him (I mean Babylonian rule as a whole)
came the kingdom of the Medes and Persia
and then the rulership from Alexander the
Great before Rome!
Rome was the iron!
And after Rome came the British empire and
subsequently the domination of Russia and
USA which later led us to this time in which
ideologies began to rule the world
There is no absolute world leader at the
moment
The idea of a symbol of authority has
been torn down from the family to religion
and government!
The spirit of this dispensation is self and
the god of self is self!
So we hear of self-made, self-determination,
self-control, self-government and
self-placement.
This new ideology based on self led to
LGBTQ, feminism, etc
Nobody allows anybody to tell them how to
live an do things anymore you would
have heard the term “do you” several times
This is what the feet of clay stands for.
It is not a flaw, it is the description of an age,
dispensation, time and season.
Saying the feet of clay is a weakness is
akin to saying the head of gold
Is strength!
Both comparisons would be unwise
It is again like saying “1600 AD is better
than the year 2000” or that 1500AD is
strength while 1900 AD is weakness
and flawed!
This analogy is wrong and should no
longer be used if we are talking about
scriptures and the meaning ascribed
to visions as explained by Daniel.
A character weakness is not feet of clay
and a character strength is not head of
gold!
To all Bible scholars out there, I ask that
the explanation of scriptures be divided in
context and not out of context that we
may keep the meaning of the
revealed truth through the word of God
sacred and sacrosanct.
If however, you insist you will continue to
use the feet of clay to describe a character
flaw, know that you have feet of clay in
your ideology and meaning and you have
deviated from the scripture and it’s true
meaning!

Saying No to Nay Sayers

The Truth You Know