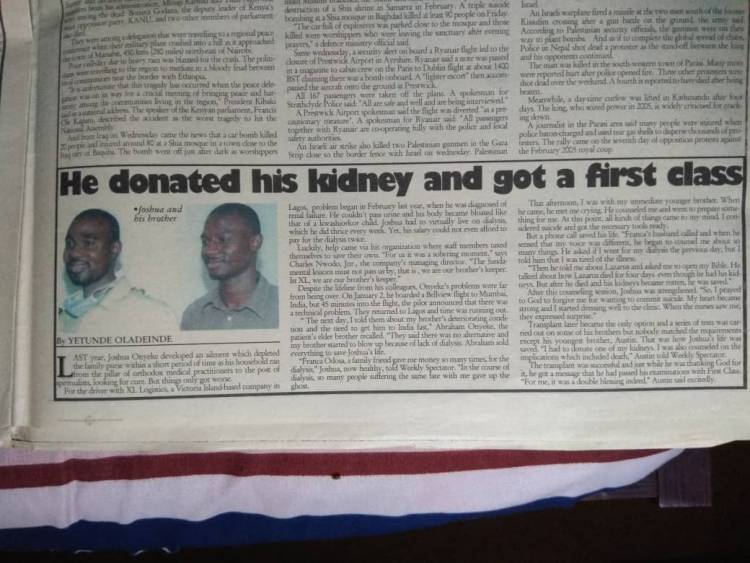 They must be making a mistake

There must be some other explanation

He had assumed all he had was fever because he was vomiting and couldn't hold down his food. At the first hospital he went to, he was treated for Typhoid but his condition only worsened!

He found himself unable to urinate!

That was when he was referred to the general hospital.

The doctors recommended dialysis in the short term and Kidney Transplant as a permanent solution.

He took in the information slowly.

He was a contract staff with a bank, how can he afford it?

He had his dialysis for the first week and promptly went back to work.

He was sure unless by the sheer hand of God he would most probably die of the Kidney Failure.

He needed a matching kidney, N 10 million for the Kidney transplant, Travel documents for the operation in India.

When he got to work he narrated his ordeal to his branch manager.

She was stirred in her spirit to help him.

She took up his case with the management of the bank.

As a contract staff, his HMO rating was basic and he didn't have  the healthcare coverage for such a complex illness

At the management meeting it was decided that a bank account should be opened to help him raise money.

This was done immediately.

Members of staff were informed of his condition and asked to voluntarily contribute something.

The next problem was finding a matching Kidney donor.

Though a genetic link between a kidney donor and a recipient was not a requirement, getting a stranger to donate a kidney without asking for an arm and a leg as payment was virtually impossible. He simply could not afford to pay a kidney donor. It would have to be a free gift!

The doctors tested all his willing siblings but couldn't find a match. His last hope was his younger brother who was writing examinations in the university. A few weeks later, his younger brother arrived! The tests were carried out and he was found to be a perfect match!

I was seating beside his hospital bed when the doctors came in with the news. They said i was a perfect match for him.

He looked at me.

He didn't say a word.

He just burst into tears.

I felt goose pimples all over me!

It was my 'Let this cup pass over me' moment.

Of course I didn't want my brother to die.

But I also didn't want to lose a kidney.

What if i die in the process?

In the end I had to ask myself.

Would I be able to live with myself if my brother died knowing i could have at least tried to save his life?

I realized i wouldn't.

I went to school and wrote a letter to defer my admission for a semester.

By this time the funds had been raised by the bank and the general public.

Our travel documents were processed

Seven months after he was diagnosed we left for India.

Himself, Myself and our older brother!

When we got to India they did some more tests

Did I understand the implication of my decision?

Did I understand the risk involved?

Was I sure I wanted to go through with it?

I signed their documents

We had gone way past that!

The next day I was prepared and taken into the theater

Our older brother told me he was still in surgery

i tried to sit up and the pain hit me

When I woke up our older brother came to me

His face was lit up with joy

"Your brother is in the bathroom, he is urinating by himself''

That was the happiest moment of my life

I cried and cried

My older brother cried too

My brother came into the room

He saw us crying

After several days we were discharged

We returned home from India

The bank held a dinner in our honour

We all shared our story

I went back to school and wrote my final examinations

I came out with a first class degree

Our story was aired on News line and many magazines

We are grateful to God and Humanity

Control your blood sugar if you have diabetes